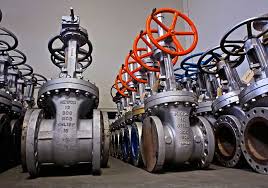 Manual valves of various designs are used in domestic and industrial applications. The most common types of manual valves are ball valves, butterfly valves, globe valves,gate valves and diaphragm valves. Of course these valve types are used in automated and remote control applications and the same type of valve is used but with an actuator mounted on the valve. Actuated valves is a different subject matter.

A number of factors have to be considered in the use of manual valves including the selection of which type of manual valve. Some of these factors include application of the valve and service medium which valve will be used in, the location of valve, access to the valve, what type of mechanism to select in operating the valve, ensure force to move the valve does not exceed the stem design, how frequent is the valve used etc.

CompareValves.com has a number of project proposals which include manual valves for various plants in the UK and abroad, please read our Valve Projects News pages for updated information and new projects coming through.

Ball valves offer excellent shut-off capabilities. A so called quarter-turn of 90 degrees completely opens or closes the valve. This feature helps reduce valve operation time and decreases the potential of leakage due to wear.

The intended use of ball valves are in the fully open or fully closed position. They are not suited to regulate flow by being kept partially open which creates additional wear and deforms the valve seat which can result in failure.

Butterfly valves are simple in construction, light in weight, and have a compact design. Their face-to-face dimension are often extremely small, making the pressure drop across a butterfly valve small. The materials used for the valving element and mechanical sealing can often limit their applications at higher temperatures or with certain types of fluids. Typical applications of butterfly valves are for water and air, and in applications with large pipe diameters.

CompareValves.com Projects: May 2017
Proposals arrived for 118 Valves for Desalination Plant in Saudi Arabia
The requirement was for 118 valves in total comprising mainly manual and motorised butterfly valves, with some flow control and check valves.
Read Further...

The globe valve is suitable for use on a wide variety of applications, from flow rate control to open/close operation.

A characteristic of globe valves by the nature of their design is that the pressure drop across the valve is greater than that of many other types of valves because the passageway is S-shaped. Valve operation time is also longer because the valve stem must be turned a number of times in order to open and close the valve, and this may eventually cause leakage of the gland seal (packing).

The design of a gate valve is similar to that of a floodgate, hence the name “gate.” With a gate valve flow is controlled by raising or lowering the valving element, which is typically available in three different types: solid (plain), flexible, and split. The flexible, and split types help prevent the valving element and body from being deformed due to various operating conditions.

Similar to ball valves, gate valves are not usually used to regulate flow. One of the reasons for this is because the valving element can be damaged when in the partially open position. Also they limit the pressure drop across the valve when fully open. However, setting the valve to the fully open or closed position requires the handle mechanism to be turned many times, which generally make gate valves have the longest operating times when compared with other types of manual valves.

The design of a diaphragm valve use a 'pinching' method to stop the valve flow using a flexible diaphragm. Diaphragm valves are available in two types: weir and straight-way. The most commonly seen of the two is the weir-type. This is because the straight-way type requires additional stretching of the diaphragm, which can shorten the diaphragm's life-span.

One of the major advantages of using diaphragm valves compared with other valve types is that the valve components can be isolated from the fluid medium. Also their construction helps prevent leakage of the fluid without the use of a gland seal (packing) as seen in other types of valves. However a downside of their design is that the diaphragm becomes worn more easily and regular maintenance is necessary if the valve is used on a regular basis. These types of valves are generally not suited for very high temperature fluids and are mainly used on liquid systems.